Anti-Terrorism Bill (No. 2) 2005 is the one that is incorporated in the explanatory memorandum: ‘I» «am» «safe but unable to be contacted for the time being.’
http://parlinfo.aph.gov.au/parlInfo/search/display/display.w3p;page=0;query=%22I%20AM%20SAFE%22;rec=3;resCount=Default

http://parlinfo.aph.gov.au/parlInfo/search/display/display.w3p;query=Id%3A%22legislation%2Fbillhome%2FR2469%22;querytype=;rec=0
Page 71
but solely for the purposes of letting the person contacted know that the person being detained is safe but is not able to be contacted for the time being.


WAKE UP AUSTRALIA THE GESTAPO IS HERE! Or will you only Realize when you see this? By then its to LATE! 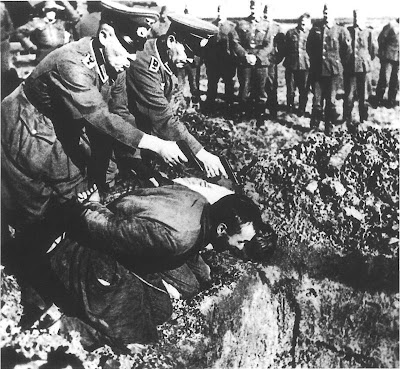 Now it seems SCARY that AUSTRALIA was the FIRST COUNTRY TO DISARM ITS PEOPLE SINCE HITLER IN WW2,
Yet it was Eisenhower who killed over 1.7 million Germans AFTER THE WAR!


Its time to take your head out of the Sand...

Forwarded is one of the most bizarre events of the recent past. Its facts were so muted and disguised as to make the entire issue, hardly plausible. Yet, the event happened, and the Gun issue in Australia emerged.... The similar event in Scotland can easily fit into the same category ..as unsolved, or at least why these people did what they did...JRN


Was Port Arthur Designed to Undermine our National Security ?

It is an accepted media "fact" that Martin Bryant, an intellectually- impaired young man with a dramatically low IQ of 66, shot dead 35 people at Port Arthur and wounded 22 others.

Not just that, but this awesome shooter managed to kill the first 19 out of 20 dead in the Broad Arrow Cafe with single accurate shots to the head fired from his right hip.

Not bad for a man with no firearm experience other than using a Webley Osprey air rifle when he was a boy, and by the way, Bryant used to fire the Webley from his left shoulder because he is and has always been left- handed.

Perhaps the media should have questioned this startling inconsistency but failed to do so. After all, the suspect was in custody, international media outlets were screaming for the "dramatic" story, and somehow Martin Bryant's increasingly desperate pleas of "Not Guilty" were ignored by all and sundry.

Why? Perhaps because the Tasmanian Government was already aware that there was absolutely no evidence of any kind linking Bryant to Port Arthur, and needed a media "conviction" to protect their exposed political hides. And so it was that Martin Bryant became the most vilified and hated man in Australia, with thousands calling for his immediate execution.

BEFORE YOU RUSH TO JUDGEMENT ON PORT ARTHUR, TAKE A HARD LOOK AT THE QUEEN v. MARTIN BRYANT, AND TRY TO ANSWER THE FOLLOWING QUESTIONS TO YOUR SATISFACTION. IT IS UNLIKELY YOU WILL BE ABLE TO DO SO.

--- 1 Two hours before the mass murder commenced at Port Arthur, all senior site personnel were collected and driven north to a management seminar more than two hours from the Historic Site. In practice, this meant that at the time of the mass murder, no experienced managers were available at the Port Arthur Site. A residential weekend management seminar had never happened before in the entire history of Port Arthur.

WHO ISSUED THIS EXTRAORDINARY ORDER ?

--- 2 One hour before the massacre commenced at Port Arthur, the only two armed policemen on the Tasman Peninsula were decoyed on an imaginary drugs bust, to a coal mine location 30 minutes drive away from Port Arthur. Within minutes of these officers reporting themselves on location at the coal mine by radio, the shooter opened fire in the Broad Arrow Cafe. Timed from the point at which shot number one was fired, the entire massacre was completed in 17 minutes elapsed tim, meaning armed police could not intervene.

WHO DECOYED THE ARMED POLICE OFFICERS ?

--- 3 The shooter entered the Broad Arrow Cafe carrying his weapons in a Prince sports bag, then left the empty sports bag in a prominent position to later "link" the murders to Martin Bryant. Problem! The Colt Commando AR15 later found by police at Seascape Cottage and claimed to be "Bryant's Murder Weapon", has a standard 14.5" barrel, making it far too long to fit into the Prince sports bag. The weapon removed from the sports bag in the Broad Arrow Cafe by the real shooter had a barrel no longer than ten inches. Where is the shortened AR15 actually used in the mass murder?

--- 4 After the mass murder, police were attracted to Seascape Cottage by a tall plume of smoke from a burning BMW in the yard. Martin Bryant remembers a BMW car but is adamant he does not remember setting fire to it, because a man was secured in the boot, or so he believed. Bryant was [Glenn Pears] was removed before the car was set on fire, and later shot dead inside Seascape Cottage. Was the car set on fire merely to destroy forensic evidence, or was it [like the Prince sports bag in the Broad Arrow Cafe], used as another 'link' to incriminate Martin Bryant ?

--- 5 Immediately after being taken into custody and while being treated at the Royal Hobart Hospital, Martin Bryant was able to easily converse with his captors, confirm he understood their questions, and plead "not guilty". How was this possible? If Bryant had been inside the Broad Arrow Cafe during the mass murder, the concussive blast of 20x.223 Remington rounds fired by an AR15 with a shortened barrel, would have severely damaged his hearing. Most survivors in the cafe were hearing impaired for weeks, and some had burst eardrums. Even the, only the shooter him self was subject to the full reflected concussive blast of all 29 rounds. This medical fact alone excludes Martin Bryant from the Broad Arrow Cafe, so who really did the shooting?

Yes that Right, for all of you who DONT RESEARCH YOUR SELVES
Former VICTORIAN POLICE OFFICER confirms Martin Briant DID NOT DO PORT ARTHER, Do you feel Safer now? Knowing there has at least been a COVER UP on why AUSTRALIA REMOVED GUNS FROM ITS OWN PEOPLE!???

Posted by Shundrallah at 8:04 AM